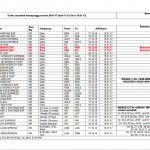 CANCELLATION/PARTIAL CANCELLATION OF PASSENGER TRAINS DUE TO FOG 54 trains cancelled, frequency of 22 reduced till 2017 Jan 15  due to fog: Full list List of Trains Cancelled Due To Fog 2016 & 2017 Click Here Due to fog, the following passenger trains have been cancelled/partially cancelled see the details in http://www.indianrailways.gov.in/ … END_OF_DOCUMENT_TOKEN_TO_BE_REPLACED